Again, my topic is pulled from current events, as Juneteenth recently made it into the news when President Trump scheduled (and then cancelled) a rally in Tulsa, Oklahoma for June 19th. As always, I hope you find these resources helpful.

Juneteenth (a blend of the words “June” and “nineteenth”) is an annual celebration of June 19, 1865 when Union general Gordon Granger read that all previously enslaved black Texans were free. Although the Civil War had ended two months earlier, and the Emancipation Proclamation had technically freed the slaves two and half years earlier, enforcement of the proclamation had been inconsistent. Juneteenth (also known as Freedom Day, Emancipation Day, and Jubilee Day) is celebrated in major cities across the U.S., but is not yet a federal holiday. 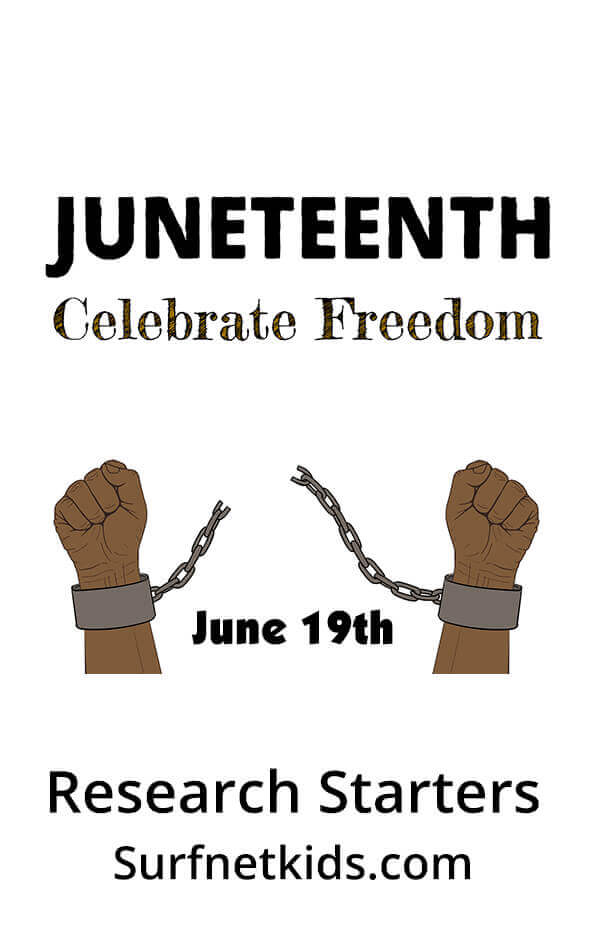 History: What is Juneteenth?

“In Texas, slavery had continued [after the Emancipation Proclamation] as the state experienced no large-scale fighting or significant presence of Union troops. Many slave owners from outside the Lone Star State viewed it as a safe haven and had moved there with their slaves.” History.com’s Juneteenth page tells the story of that day, and includes lots of links to related topics including the Emancipation Proclamation, Confederate states, Abraham Lincoln, and the 13th Amendment. “Juneteenth marks an effective end to slavery in the United States and is considered the longest-running African American holiday.”

Juneteenth.com is a registry of Juneteenth organizations and celebrations. This section tells the history of the holiday. “The reactions to this profound news [of new freedom] ranged from pure shock to immediate jubilation. While many lingered to learn of this new employer to employee relationship, many left before these offers were completely off the lips of their former ‘masters’ – attesting to the varying conditions on the plantations and the realization of freedom. Even with nowhere to go, many felt that leaving the plantation would be their first grasp of freedom.”

Mental Floss: 12 Things You Might Not Know About Juneteenth

Learn more about Juneteen in this listicle from Mental Floss. “5. NOT ALL ENSLAVED PEOPLE WERE FREED INSTANTLY. Texas is a large state, and General Granger’s order (and the troops needed to enforce it) were slow to spread. According to historian James Smallwood, many enslavers deliberately suppressed the information until after the harvest, and some beyond that. Other theories include that the original messenger was murdered to prevent the information from being relayed or that the federal government purposely delayed the announcement to Texas to get one more cotton harvest out of the enslaved workers.”

“Where justice is denied, where poverty is enforced, where ignorance prevails, and where any one class is made to feel that society is an organized conspiracy to oppress, rob and degrade them, neither persons nor property will be safe.” ~~ Frederick Douglass ~~ (February 1817 – February 20, 1895) American social reformer, abolitionist, orator, writer and statesman. Click this link to find more quotes about justice.