Wow! Did you get to see the solar eclipse? What a show!

In the world of children’s literature, E.B. White is a super-star: the author of three beloved classics “Stuart Little,” “Charlotte’s Web,” and “The Trumpet of the Swan.” He also co-authored my favorite guide to the writer’s craft, “Elements of Style.” 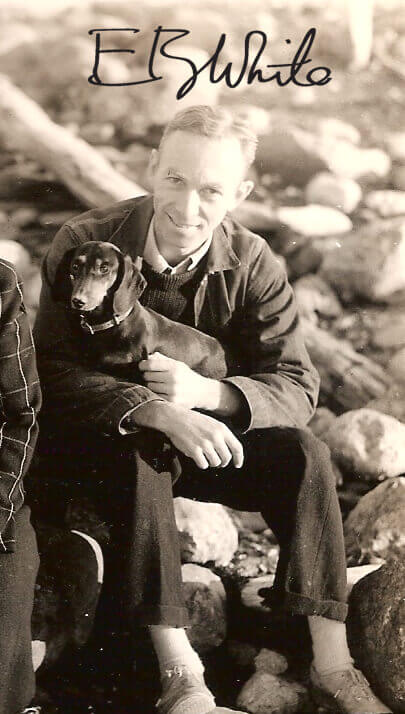 Born Elwyn Brooks White, on July 11, 1899, in Mount Vernon, New York, White was never fond of his name. “”I never liked Elwyn. My mother just hung it on me because she’d run out of names. I was her sixth child.” Visit this biography for quick facts, a short biography, and links to other famous writers.

In 1999, after a successful half-century as a “quietly beloved literary figure,” Stuart Little made a splash on the big screen in Sony’s live-action/computer-animated film. The movie doesn’t follow the book’s tone or plot, but it was a huge success. Visit Fact Monster for more on how both the book and the movie were received by critics and the public.

This official site from White’s publisher includes a short biography, a book summary, and a letter from E.B. White. Where did the idea for Stuart Little come from? “Well, many years ago I went to bed one night in a railway sleeping car, and during the night I dreamed about a tiny boy who acted rather like a mouse. That’s how the story of Stuart Little got started.”

“The only books that influence us are those for which we are ready, and which have gone a little farther down our particular path than we have yet got ourselves.” ~~ E.M. Forster ~~ (January 1, 1879 – June 7, 1970) English novelist. For those who love to read, here are more quotes about reading.