Thank you so much for your replies of good news! I needed them last week. This week I have good news to share. First, I am grateful to to be alive in an era of amazing medical miracles. After a few stressful weeks, my husband got in to see a specialist and is scheduled for a minor procedure next week. Woot! This is exactly what we were hoping for.

Second piece of good news. Are you familiar with the Yiddish word “nachas”? It is parental pride in the achievements and happiness of our children. A few months ago I was bursting with happiness at the wedding of our son. And this week we were thrilled to learn that our daughter won a prestigious award honoring her medical research. Nachas, indeed!

Thanks also for your encouraging words about the work I do every week at Surfnetkids. Your support is the only reason I’m still doing it 22 years later. I remember when I first started writing a weekly Surfnetkids column (which was syndicated in newspapers nationally), my bio called me a mother of two young children. I kept that bio for a few years longer than I should have! How come they grow up, and we don’t age? LOL

Alexander Graham Bell was born March 3, 1847 in Edinburgh, Scotland. March is also the anniversary of his most famous invention: the telephone. In 1875, after receiving a patent for the transmission of multiple telegraph signals on a single wire, Bell and his assistant Thomas Watson, set out to invent the telephone. Success came on March 10, 1876. 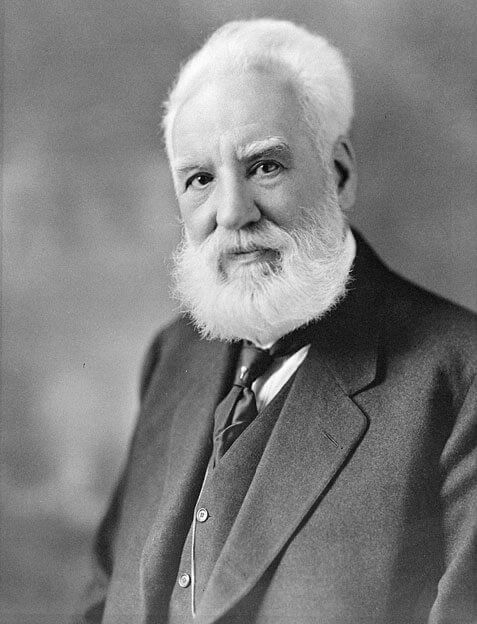 “Bell’s education was largely received through numerous experiments in sound and the furthering of his father’s work on Visible Speech for the deaf. Bell worked with Thomas Watson on the design and patent of the first practical telephone. In all, Bell held 18 patents in his name alone and 12 that he shared with collaborators.” Visit Biography.com for quick facts, Bell quotes, and three videos, including a full-length (43 minute) biography video.

Alexander Graham Bell was nominated in 2004 as one of Canada’s favorite sons. This page tells Bell’s story, with emphasis on the time he spent in Canada. “Although Bell was born in Scotland, he moved with his parents to Ontario [Canada] when he was 23. He ended up moving and settling in the United States just a year later, but he bought a summer home in Nova Scotia [Canada] in 1885, and ended up living there until he died.”

Bell “first became interested in the science of sound because both his mother and wife were deaf. His experiments in sound eventually let him to want to send voice signals down a telegraph wire.” Elementary and middle-school students should visit Duckster for fun facts, and links to bios of other inventors and scientists.

“Concentrate all your thoughts upon the work at hand. The sun’s rays do not burn until brought to focus.” ~~ Alexander Graham Bell (March 3, 1847 – August 2, 1922) American inventor. Click the link for more quotes about determination.