A little off topic, but I’m in need of everyone’s favorite recipes for halibut and/or salmon. My husband just returned from a five-day Alaskan fishing trip, and I’ve got fifty pounds of flash frozen fish fillets. I’ve got one go-to salmon recipe (barbequed on a cedar plank) but now I’m in desperate need of some variety. Your suggestions are appreciated! I hope all my American readers enjoyed their 4th of July celebrations.

The French Revolution (1789 – 1799) was a period of political and social upheaval when the people of France brought down the monarchy and strengthened the middle class. The revolution ended when the popular French general, Napoleon Bonaparte, took power as emperor and France became a republic. 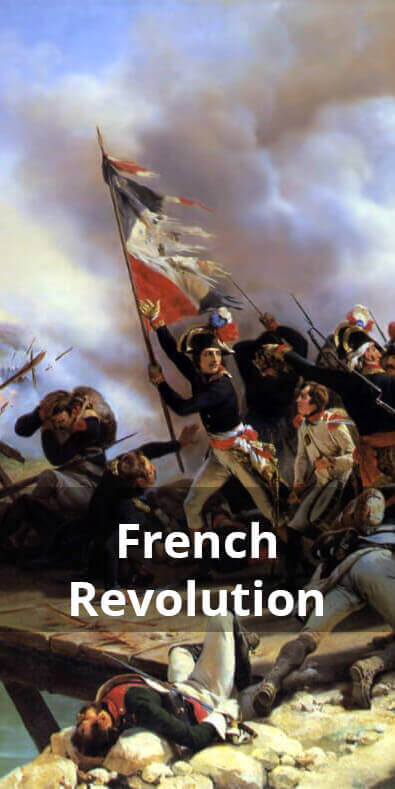 “The darkest period of the French Revolution is called the Reign of Terror which lasted from 1793 to 1794. During this time, a man named Robespierre led the National Convention and the Committee of Public Safety. He wanted to stamp out any opposition to the revolution, so he called for a rule of ‘Terror.'” In addition to this multi-page history lesson, there is also a crossword puzzle, word search, and glossary of terms.

Fact Monster offers a hyperlinked history of the French Revolution, reprinted from the Columbia Electronic Encyclopedia. “Historians disagree in evaluating the factors that brought about the Revolution. To some extent at least, it came not because France was backward, but because the country’s economic and intellectual development was not matched by social and political change.” A link to related articles can be found at the bottom of this page.

Learn about Bastille Day in a music video starring musician and artist Jeffrey Lewis. “A popular insurgency culminated on July 14 when rioters stormed the Bastille fortress in an attempt to secure gunpowder and weapons; many consider this event, now commemorated in France as a national holiday, as the start of the French Revolution.” An overview of the entire revolution follows the featured video.