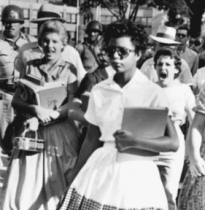 Following the U.S. Supreme Court’s 1954 Brown v. Board of Education decision supporting school integration, the Little Rock, Arkansas School Board agreed to integrate by the 1957/1958 school year. However, on September 4, 1957, when nine black high-school students showed up at Little Rock’s all-white Central High School they were greeted by the Arkansas National Guard, deployed by Governor Orval Faubus to support continued segregation. You can learn the rest of the story at the following sites.